The Dirty TRUTH About Whey Protein

Perhaps the most popular nutritional supplement EVER is whey protein. Heck, you can even buy some of the worst, cheapest whey protein around conveniently at your local Wal-Mart. Now that’s when you KNOW it’s popular.
But here’s the truth: Whey protein, even the “high quality” stuff that you’d pay an arm and a leg to obtain from your local Vitamin Shoppe or GNC, could very likely be stalling your fat loss progress and, even WORSE, causing you to GAIN weight.
And if that wasn’t enough, here are the absolute WORST times to consume whey protein:
1. During the day
2. In the evening
Scratching your head? Don’t: you understood it perfectly. Whey protein simply isn’t a great protein to consume at any time of day, and for specific reasons.
1. Whey Protein Absorption – A review on the rate of protein absorption published in 2006 in theInternational Journal of Sport Nutrition and Exercise Metabolism reported that whey protein isolate absorbs at a rate of about 8g/hour. This is in large part due to the fact that whey is not broken down into small enough peptides by our body’s natural enzymes in time to be absorbed.
Couple that with the fact that the window of opportunity for whey protein to be absorbed is 1.5 hours, your body at maximum will be able to absorb 12 grams of whey protein from a single serving.
Kind of makes those 40g whey protein shakes seem foolish, doesn’t it? Well, that’s because they are.
Simply put, whey protein passes through the system far too rapidly to be adequately absorbed, leaving the majority of your protein shake wasted…literally.
2. Insulin Release Associated With Whey – Which of the two items below cause a greater spike in insulin? 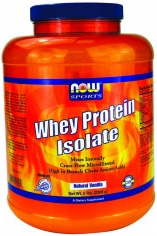 b) Whey Protein
Well, as you can probably guess, if you chose the horrendous, high glycemic, void-of-all-nutritionwhite bread, you’d be 100%…WRONG.
That’s right, a 2012 study published in Nutrition & Metabolism identified that the specific amino acids in whey protein stimulate beta cells to secrete more insulin than a similar amount of carbohydrate from white bread.
In the presence of insulin, fat burning essentially stops.
This makes a whey-protein-only supplement a big-time no-no for evening use, especially pre-bedtime when avoiding spikes in insulin are paramount as metabolism is already slowing down in preparation for its normal, much slower sleep rhythm.
The truth is, whey protein simply isn’t an ideal protein to use at any other time other than immediately following exercise, and even then the amount you’re able to absorb on a per serving basis is extremely limited.

The fact is, whey is an extremely high quality protein with one of the highest biological values of any protein source, but it possesses two undeniable downsides in its very limited absorption rate and record-setting insulin response.
Still, you may be wondering if it’s possible to somehow get the positive benefits of whey without the downsides, and the answer is YES. The trick is to combine whey with other medium-speed and slow-digesting proteins such as milk protein and micellar casein, respectively.
This combination of proteins will significantly reduce the overall insulin response from the whey while ensuring optimal absorption of each protein due to its slower digestion and time-released nature.
But don’t be fooled – most time-released protein blends are a total FRAUD. Sure, it’s “sexy” to market a time-released “blend” of proteins, but the unfortunate truth is that most of these blends consist of 90% cheap, denatured whey and contain very little of the more expensive slow-digesting proteins that make a true time-released protein product work.
How do you know how much of each protein is contained in these so-called “blends”? Well, the ONLY real way to know is by the brand listing the exact amounts of each protein on their label, which hardly anyone does. 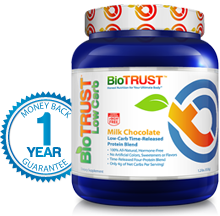 With BioTrust Low Carb we put together a true 25-25-25-25 blend of micellar casein, milk protein concentrate, whey protein isolate, and whey protein concentrate. Yes, it’s much more expensive to produce than a simple, low-absorbing, insulin-spiking whey protein powder, or a fraudulent “proprietary blend” of proteins that in reality is still 90% whey, but we feel we owe it to our customers to give them a product that delivers a true solution to the whey protein dilemma, even if it cuts into our profit margins.
After all, we created BioTrust for you, your body, and your results; and when you pick up a 4-pack of BioTrust Low Carb today, you’ll score a whopping 25% savings!
==> Get the SOLUTION to the whey protein dilemma (up to 25% OFF)
And it tastes awesome. See for yourself and save 25% on our 4-pack today:
==> Get the SOLUTION to the whey protein dilemma (up to 25% OFF)
Keep rockin’,
Rafael
The Boot Camp Rebel
PS...leave your thought and comments below
Posted by Rafael Moret at 2:21 PM